My younger brother is 14 years. He looks childish. Should I show him to a doctor? 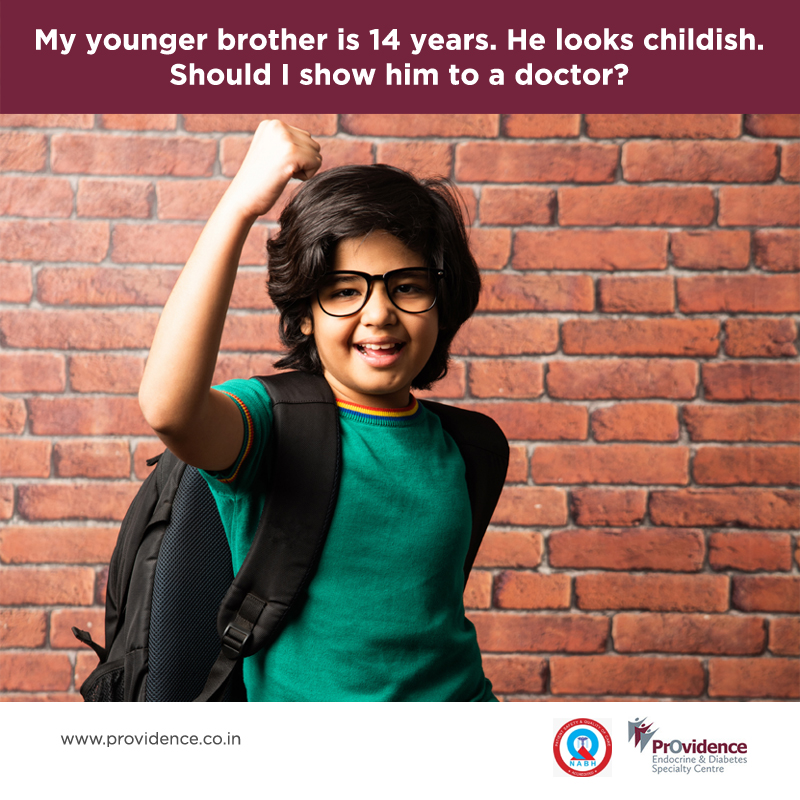 At 14 years, it can be upsetting for a child not to grow and develop physically as quickly as their peers. An endocrinologist is often able to detect signs that puberty has started. Boys can start puberty at a wide range of ages beginning between 11 and 14, so we consider puberty delayed when it has not begun by age 14. The earliest sign of puberty in boys is an enlargement of the testicles, followed by growth of the penis and pubic hair. The growth spurt usually starts a year or so after the genitals enlarge, generally by age 15. Only later, hair develops over the face and the chest.
For boys who don’t show any signs of puberty by 14, it should be evaluated by an endocrinologist. Fortunately, by far, the most common cause is constitutional delayed puberty. This is a normal variant of growth. These boys are generally healthy and will eventually go through puberty if given enough time. In most cases, it is inherited from one or both parents.
The physical exam is often enough, and the key finding is that the penis and testicles do not enlarge by age 14. Sometimes investigations are done to find out if there are actual disorders of male hormone production. Also, An x-ray of the hand and wrist to determine the bone age is often ordered, to look for the delay in bone maturation. Rarely imaging tests such as MRI and Ultrasound are asked to determine the exact nature of delayed puberty.